Must Have Features & Benefits Of NFT Gamification To Transform Gaming Industry 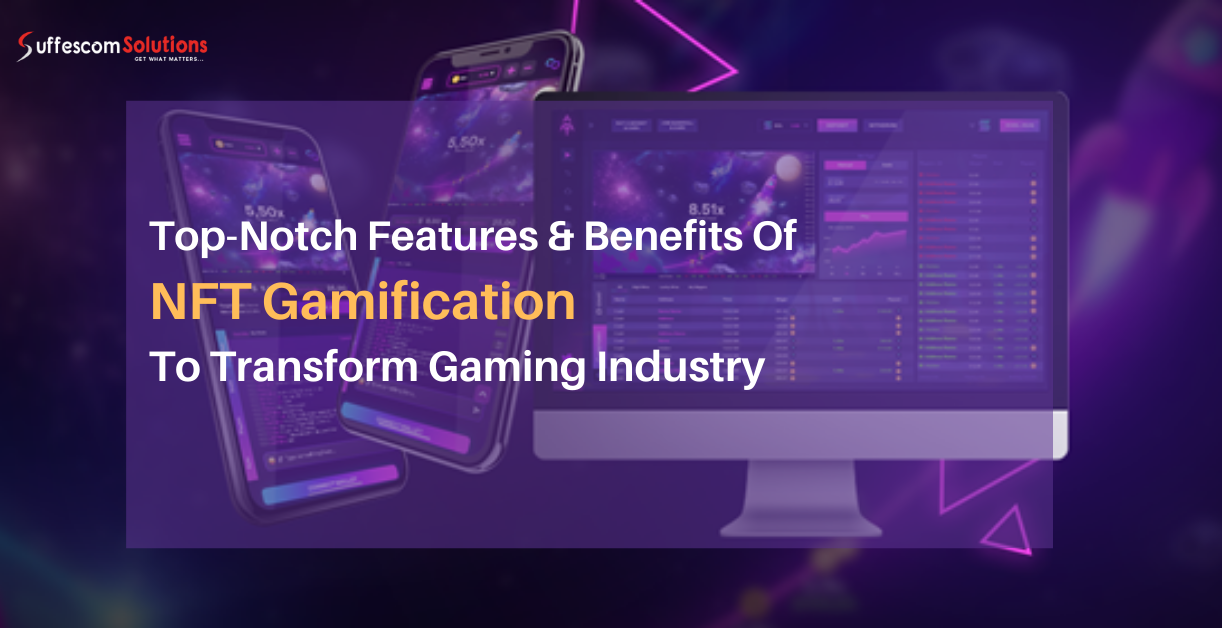 Recently, NFTs have created an uproar in the global market. It has revamped every business domain be it, media, education, healthcare, real estate, etc. Strikingly, its impact on the gaming industry has been fantastic. The virtual players relish crypto gamification allowing them to earn monetary accolades. The current demand in the gaming space has mushroomed the fraternity of conventional gamers along with crypto investors.

NFT gamification aims in utilizing modern technologies to attain massive growth in a short span of time. The innovative techniques conjoined with the metaverse technology have awestruck the players. They allow boundless facilities such as permitting participants to maneuver items, characters, and some salable gaming objects. Furthermore, the players not only enjoy playing but also get auxiliary income.

In this article, we’ll give you a thorough understanding of the gamify NFT and how it has brought a radical change in the gaming world.

The typical games with simplistic features are now not able to draw the attention of the users. To make them glued to the gaming realm, blockchain technology is appended to enhance their characteristics. Various platforms are created that help the users to trade and exchange gaming assets for money.

The assets correlated with gaming are computerized as NFTs that possess a certain value among the gamers and the collectors. The NFT gamification works in a way that every player has certain NFTs to engage with and earn cryptocurrency rewards. Another thing is that it authorizes the gamify NFT to build their virtual worlds. The gamers are even allowed to have a decent interaction with their contemporaries to carry out tasks and collect prizes.

NFT gamification has amplified every outlook and allowed the industry to integrate various cryptologic elements in the games to make the whole experience noteworthy. Businesses are trying out every possible way to stimulate their development in the virtual world. As stated earlier, every industry has infused a considerable amount of money into NFTs.Taking a cue from them, the gaming industry has a loyal fan following which will help them in garnering more customers. This NFT gaming performs in multiple ways and has created a drastic influence in this space.

The foremost prowess of gaming was always play-to-win. The users used to play games and pass every stage and win prizes. This format doesn’t include any lucrative offers that a player can win after surpassing the stage. Now, there is the latest model known as Play-to-Earn that provides tangible economic returns to the users. This has the biggest advantage as at a time, the players can have fun and earn certain money as a reward.

This feature has enticed numerous users to take part in play-to-earn games. Majorly two techniques are applied to receive cash from play-to-earn games. The first is the reward that one earns after winning the game and the second is via the trading of the NFTs.This whole process starts when the players put their money in any NFT character of their choice. After that these NFTs are then sold in the virtual marketplace. This generates wealth without any developer's intervention.

This NFT gaming is actually a brand new sensation whose success is dependent upon the popularity of the NFT gaming space.

With better codependency, it is capable of developing a perfect relationship among the members. It helps in the escalation in the number of the game players which eventually helps the Guild in procuring more users.

On the other hand, the NFT game development provide great interoperability. The individualistic assets in a variety of games are authorized. It means that the characters and assets are related to any specific game without any control of the developers.

These gaming assets are replaceable in the marketplaces. There is a complete duplication of the data between various games. In all straightforwardness, this means that the blockchain gamers are able to exhibit the NFTs that are owned by a single wallet beyond metaverses.

NFT Staking: The other gripping component of the gamify NFT is the NFT staking. There are also a few NFT games that authenticate the users to shut out the cryptocurrencies in smart contracts. This ultimately helps in generating rewards.

The NFT staking recompenses the users with amazing mystery boxes. The mystery box possesses a unique NFT that is sold in the secondary market. There is a massive initial deposit required to earn massive staking rewards.

This is an unconventional way to earn passive income by seizing their assets on the DeFi platforms without selling the NFT collections.

To get started with the NFT gaming, the players can either buy or acquire the gaming assets for their preferred blockchain-based games. There are quite a few changes that help the gamers in gathering NFT characters or commodities with an intention of empowering the metaverse gaming future.

After that, the IGO collections are launched in the marketplaces every week where the NFT collections from the gaming projects get featured exclusively. The nft gaming has a wonderful power to unbolt the gameplay and add ancillary benefits to its varied aspects.

The  NFT gaming facilitates the players to be the only owner of the in-game items and allows the trading, be it selling or holding it. The concept of earning online through gaming is not something unusual but the only thing that makes it an exceptional one is the adaptability and the security.

The players are allowed to purchase the in-game items and the large power potential is kept within the hands of the players. They are also in the position to sell the items and obtain a large portion of the profit from the succeeding reselling.

For the individuals who have lived on selling the old games for the new, it will be massive for the virtual game generation.

Now play-to-earn games have not just been a hobby for individuals. In the beginning it used to be a fun way of earning money but now people are able to earn a living from these in-games. They have more than 3 million users and by looking at the current scenario they are bound to surge.

The chief leaders of the metaverse are the NFT-powered gaming. Metaverse when applied with Web 3, has the full potency to work, interact, play, converse, etc.

These games have numerous characteristics and alignments that inadvertently allow countless characters. Gaming has become the heart of the metaverse and NFT will surely pave the way by making it much more convenient and rapid.

Gaming has always been an evergreen marketplace. People of all age groups enjoy playing online games. It brings a great source of mental peace by instilling complicated problem-solving capabilities.it also helps in encouraging community interactivity among the members.

Now, in addition, to maintaining mental peace the other way with which it can cause benefit is by earning a substantial amount of money.

The other major advantages of the NFT gaming are illustrated as under, let’s have a look below;

From the gamer's perspective:

The popularity of crypto gamification has caused a positive disruption in the gaming world. There has been a reasonable amount of profit generated by the creators.

It is mainly due to the escalated number of users that subscribe to these platforms. Unknowingly, these users have become the loyal fans and players of these gaming podiums.

Take the recent example of the pandemic, where people lost their jobs with absolutely no earning facilities.

Online gaming at that point in time served as a boon where several people were droved towards it to earn their daily earnings. Let’s check out their benefits as under;

Gaming is an amusing affair for some and for others it has evolved into a professional job. For that reason, only the expert players used to gain from it.

But things have taken a big turn where anyone can now reshuffle their gaming time into an investment by trading the digital assets.

The extent of earning a wage equivalent to the full job:

The scope of drawing a gigantic amount of money from the crypto games has now become a reality. During these times, if someone really enjoys playing games, and wants to make a living out of it, then it is very much possible.

In addition to the NFT games that enable the players to earn  $100/day, the sale of assets has surpassed the actual income. Although it's also true that to reach a worthy level of income, it takes reasonable time and effort.

Complete information related to NFT gaming is saved in their code by utilizing blockchain technology. On proper decoding, one can find out the pioneer and the history of a specific NFT by decoding it.

On the proper transfer of the NFT to a completely new possessor, the existing record is kept on the blockchain codebase. The process of ownership is entirely verifiable which makes no place for the imposters.

There is the highest level of security and steadiness related to the NFT-based gaming solutions. Play-to-earn games have a lot to do about the money invested in the platform. They also use sturdy cutting-edge technologies so that the gamer's virtual assets are preserved and protected.

Gaming is all about money whether earned or generated. A whopping sum of money is invested by the developers. After that,  the overall branding and marketing also require a huge money inflow.

These procedures are followed by the game owners to make NFT gaming offers the following gains to its owners:

Probability of enticing the venture capital:

Intelligent investors know about the profit related to the crypto markets infused with blockchain technology.

Many products and services are sold efficiently by the NFT gamification. It has become a sure-shot hit to garner the interest of the gaming venture capital investors.

It has been reported that the venture capital funds that are used to invest in blockchain-based companies are expected to invest more than 52 billion dollars between 2021 and 2022.

Amplifying the growth of gaming solutions:

Gamification will undoubtedly boost the previous as well as the upcoming gaming solutions. Necessary revenue opportunities will be provided to engage upcoming users to their platforms.

The users who have registered and played the games can have a glance at their ratings. Thus, the NFT gaming helps in providing alluring options to its users by permitting them to earn money.

The  NFT Gamification has every capability to enhance the dynamics in more surprising ways. It has successful in-game lucrative systems due to which the NFTs can be applied in more innovative ways depending on the game's essence.

Also, they have the potential to launch new game types in between old gaming categories. The deep-rooted characteristics of the in-games have the power to boost the gaming industry tremendously.