Difference Between Public and Private Blockchain | Private Vs Public Blockchain 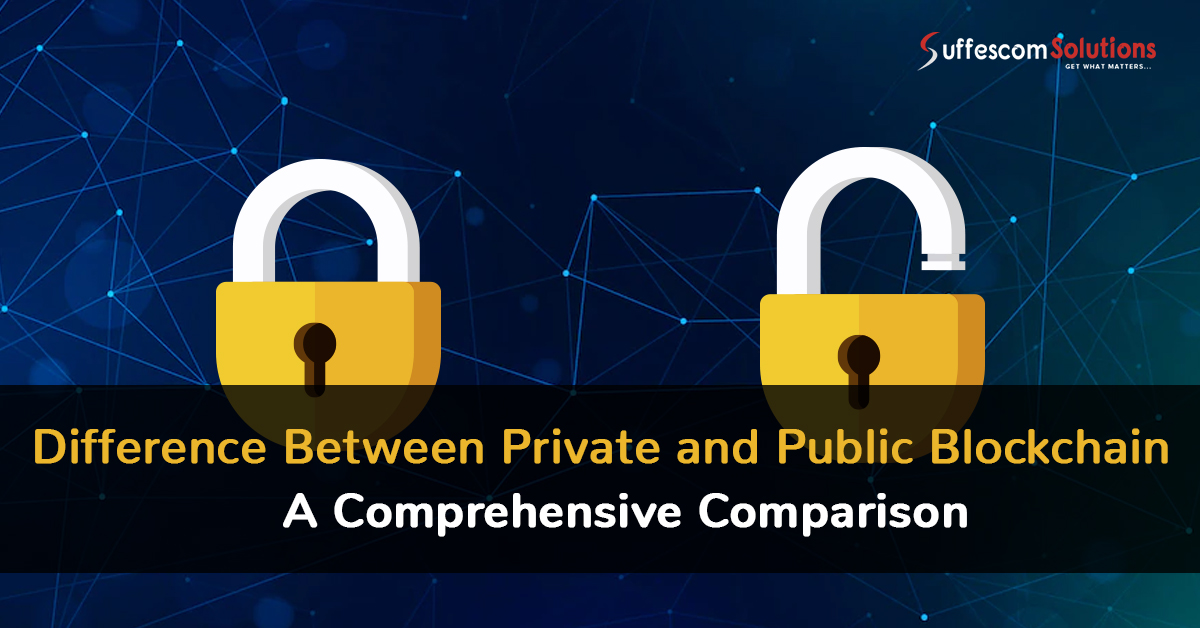 If you had asked someone about blockchain a few decades ago, you would have been derided and dismissed as trivial. Blockchains have grown into various varieties depending on their architecture and setup over the last several years.

Public and private blockchains are the two most prevalent types. Numerous cryptocurrency networks and individual businesses heavily utilize them.

What Is Public Blockchain Technology?

Currently, public blockchains are largely used for bitcoin exchange and mining. On these public blockchains, nodes "mine" for cryptocurrency by solving cryptographic equations to create blocks for the transactions requested on the network. In exchange for their efforts, miner nodes receive a small quantity of bitcoin. The miners essentially operate as new-era bank tellers, facilitating transactions in exchange for a fee (or "mine").

For instance, Ethereum is a public blockchain platform.

Public blockchain firms consistently construct each platform with the utmost security in mind. In reality, businesses and organizations are subjected to cyber hacks daily. It's becoming a significant impediment as time passes.

Additionally, it results in billions of dollars in annual losses.

However, companies can easily avoid hacking difficulties with all the security procedures inherent in a public blockchain. Additionally, they can ensure actual value or improved data quality for every project.

As you may already know, the public blockchain is open to everybody, as its name implies. As a result, you can access these platforms regardless of your location. All you'd need is a computer and a reliable internet connection. As a result, you will always benefit from blockchain technology. Additionally, you can utilize it to do business in a secure atmosphere. Additionally, mining can earn you money.

Everyone is anonymous on a public blockchain. There is no reason to use your true name or identity; everything will remain concealed, and no one will be able to follow you based on that.

Because it is a public domain, this provision is primarily for protecting one's personal property. Many criminals prefer to pay for unlawful acts on the dark web with bitcoin. This is also one of the public blockchain's downsides.

Nodes on a public blockchain are not required to follow any regulations. Thus, there is no end to how one might utilize this platform for their advancement.

This means that you can access the ledger at any time. As a result, there is no room for corruption or inconsistency. In any case, everyone is responsible for maintaining the ledger and participating in consensus.

True decentralization is achieved with a public blockchain. This is something that private blockchain networks completely lack. Because everyone has a copy of the ledger, it also has a distributed nature.

Essentially, this sort of blockchain does not have a centralized entity. As a result, nodes are completely responsible for network maintenance. They are updating the ledger using a consensus algorithm to improve fairness.

Additionally, these aspects ensure that the system maintains a decentralized environment.

Typically, any network requires the user to adhere to many rules and regulations. However, this is not the case with public blockchain networks. Because there is no central authority monitoring their every step, all users are empowered.

Additionally, these platforms are accessible to the public, so no corporation can prevent you from downloading the nodes and participating in the consensus.

This is something that private blockchain platforms do not offer. Additionally, if you examine private blockchains, you'll notice that users do not have complete freedom. Our ICO experts can help you enter the crypto space.

When data is stored on the blockchain, it cannot be altered.

As opposed to a client-server model, the database is not centralized, and all nodes in the blockchain participate in transaction validation.

What is a Private Blockchain Technology?

The network is controlled by one or more entities, which results in a dependency on third parties for transactions. Only the parties to the transaction will know about it, while others will be unable to access it, i.e., private transactions.

Private blockchains are only partially decentralized due to their restricted public access. Ripple, a business-to-business virtual cryptocurrency exchange network, and Hyperledger, an umbrella project for open-source blockchain applications, are two instances of private blockchains.

Private blockchain solutions are typically more concerned about privacy than public blockchain systems. If you're seeking a solution that can provide your organization with the highest level of anonymity, this is it.

While this may appear a bit extreme, it is the reality. Enterprises are constantly confronted with security and privacy concerns. Additionally, they deal with such sensitive data daily. If even one of them is disclosed, it might suffer a catastrophic loss.

That is why a business must utilize a network capable of securing sensitive information. This is where private blockchains enter the picture.

Increased Efficiency and Speed of Transactions

While public blockchains were the first, they are notorious for their inefficiencies. Why? That is because they are the ones who introduce everyone to the network. As a result, as more individuals attempt to use the features, the platforms cannot support them.

As a result, it accelerates swiftly. On the other hand, private blockchain networks are restricted to few participants. They frequently have specific responsibilities to accomplish. As a result, they have no method of using additional resources and slowing down the platform.

Private blockchain solutions are reliable, and they will provide you with the peace of mind you desire. Essentially, each blockchain platform requires you to pay a charge to conduct a transaction. However, the cost might significantly increase on public platforms due to the pressure from nodes seeking transactions.

When there are too many transaction requests, completing them takes time. Additionally, as time passes, the charge climbs significantly. However, this is not the case with private blockchain platforms. Because only a small number of people can request transactions, there are no delays.

These blockchains have gained popularity as a result of their well-designed governance structures. They are well-organized and assist administrators in maintaining data or updating the network quickly. They are significantly quicker than public blockchain networks.

Consortium/federated blockchains fall within this group when it comes to implementation. External parties are not permitted to participate in these networks. It provides customers with increased scalability, making it an ideal alternative for organizations needing command and control. A public blockchain is completely free, whereas a permissioned blockchain is not.

However, the expense is justified due to the transaction's rapidity and efficiency. Additionally, permissioned blockchains consume little energy, which results in cost savings and benefits the environment.

Transform Your Business Idea Into Reality

Each business organization must decide which blockchain type to adopt, public or private, considering their respective company strengths and limitations, aims, and objectives.

Want to find out more about how to proceed with your idea? Contact with our highly experienced hybrid blockchain developer!