The Future Use Cases of Blockchain for Cybersecurity | How is blockchain used in cybersecurity? 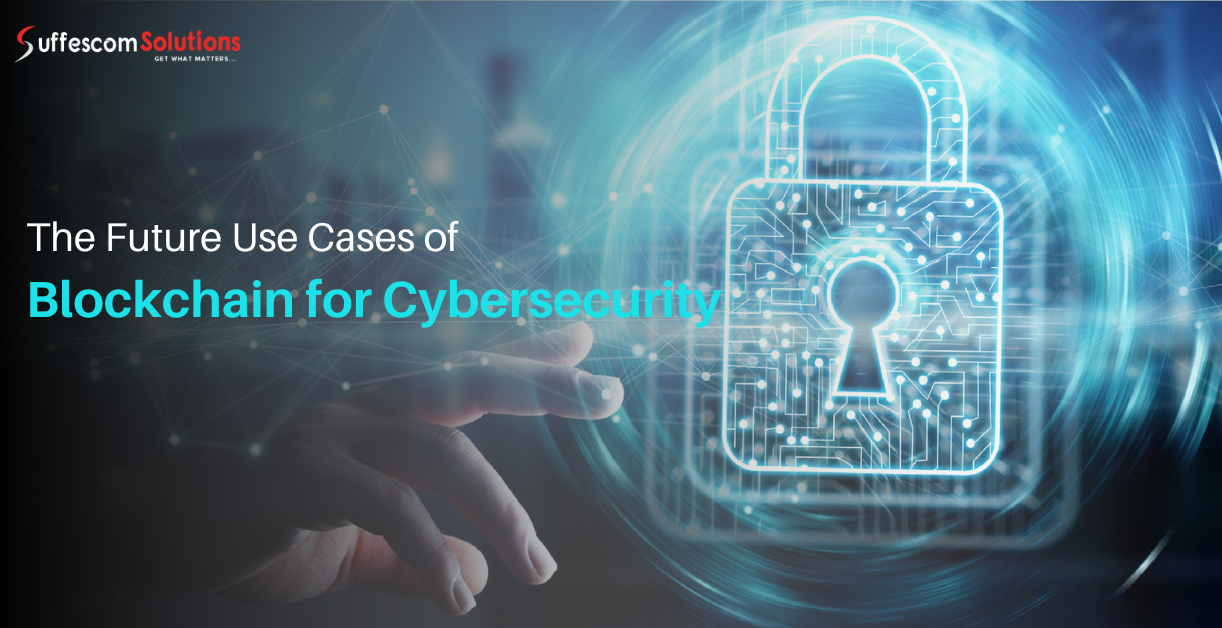 Even the most well-positioned businesses can be harmed by a successful cyber-attack. Data breaches not only cause significant financial losses, but they are also the leading cause of a victim company's negative reputation.

While blockchain was initially used to power Bitcoin, it has grown in popularity as a promising cybersecurity mitigation technology.

It's a difficult and risky time for businesses that rely on digital network platforms. Cyber-attacks and data breaches continue to plague online activities on an ever-increasingly sophisticated and destructive scale. As this nightmare continues to unfold, not only small businesses but also large IT companies such as Siemens, Facebook, Yahoo, Microsoft, and LG, to name a few, are becoming targets.

Recent Research of Blockchain for Cybersecurity

Businesses are now experiencing cyber attack and other types of data breaches on a daily basis. According to recent research and statistics, even seemingly inviolate state institutions like national campaigns are sensitive to these attacks. This shows that cybersecurity isn't just a concern for businesses; it's also a concern for governments and other government entities.

In order to develop viable cybersecurity protection strategies, it would be prudent to examine recent cyber-attack trends and statistics.

Cyber-attacks cost $2 trillion in damages in 2019, according to Juniper Research. Businesses continue to invest more in cybersecurity despite the severe financial consequences. To combat these malicious attacks, global cybersecurity spending is expected to reach $2 billion by 2030.

Looking For The Team To Build A Brand New Blockchain App?

The Future of Cyber-assaults and Malware

Cyber-attacks benefit from the current rapid advancement of technology because they can evolve and become more sophisticated and executable. With the introduction of game-changing fifth-generation (5G) networks capable of tenfold faster download speeds, hackers will inevitably have more opportunities. Increased speeds make it more likely that more devices will be hacked and larger cyber-attacks will be carried out.

The Internet of Things has a huge commercial appetite (IoT). From furniture to utility equipment, almost everything is being fitted with internet-connected sensors. Gartner predicts that by 2021, the number of things connected to the internet will have risen from 14 billion to 25 billion. The majority of these new technologies lack adequate security features, which makes them attractive to hackers. Furthermore, home automation features may expose more homes to criminal cyber-attacks.

What is blockchain technology?

Particularly, human error continues to be the leading cause of data breaches. Data storage is completely automated with blockchain technology, eliminating the need for human intervention in these systems.

Blockchain technology is applicable to any sector or industry. This is because any type of digital asset or transaction from any industry can be added to blockchain. The new technology is regarded as a secure cybersecurity protocol due to its capability of detecting malicious activity and assuring the integrity of transactions.

Transparency was a primary goal of blockchain technology. Thus, contrary to a widely held misconception, blockchain does not guarantee the privacy or confidentiality of any transactions conducted on it. When the term "secure" is used, it refers to the transaction's integrity, not its privacy.

Cybersecurity Use Cases for Blockchain

Although not impartial, blockchain technology has evolved into one of the most impenetrable methods of transacting in the digital network realm. The technology has been credited with ensuring the integrity of data when used as designed and intended. Numerous sectors can benefit from it if it is properly utilized.

Numerous attacks against social media platforms such as Twitter and Facebook have occurred in the recent past. These attacks resulted in data breaches involving millions of accounts and the theft of user information. If blockchain technologies are implemented properly in these messaging systems, they have the potential to prevent future cyberattacks.

In this case, blockchain and Iot can be used to decentralize the administration of such large-scale systems or devices. The approach will endow the device with the ability to make security decisions on its own. By not relying on a central administrator or authority, edge devices increase their security by detecting and responding to suspicious commands from unknown networks.

Typically, hackers penetrate a device's central administration and gain complete control of the devices and systems. By decentralizing such device authority systems, blockchain makes it more difficult to carry out such attacks (if even possible).

A Distributed Denial of Service (DDoS) attack occurs when users of a target resource, such as a network resource, server, or website, are denied access or service. These attacks bring resource systems to a halt or significantly slow them down.

On the other hand, a fully functional Domain Name System (DNS) is highly centralized, making it an ideal target for hackers looking to compromise the connection between an IP address and the website's name. This attack disables a website's ability to accept payments and even redirects users to other scam websites.

Data breaches and theft are becoming a primary source of concern for businesses. The majority of businesses continue to use a centralized storage medium. To gain access to all data stored in these systems, a hacker need only exploit a single weak point. A criminal gains access to sensitive and confidential data, such as business financial records, as a result of such an attack.

Blockchain technology can be used to ensure the integrity of software downloads, thereby preventing foreign intrusion. As with MD5 hashes, blockchain can be used to verify activities such as firmware updates, installers, and patches in order to prevent malicious software from being installed on computers. The MD5 scenario compares the new software's identity to hashes available on vendor websites. This method is not entirely foolproof, as the provider's platform's hashes may already be compromised.

The integrity of information generated by cyber-physical systems has been compromised by data tampering, system misconfiguration, and component failure. However, the information integrity and verification capabilities of blockchain technology can be used to authenticate the status of any cyber-physical infrastructure. The information generated on the infrastructure's components via blockchain technology may provide a more secure chain of custody.

In the future, blockchain technology may be used to prevent unauthorized access to data in transit. By utilizing the technology's complete encryption feature, data transmission can be secured to prevent malicious actors, whether individuals or organizations, from gaining access to it.

Hackers with malicious intent intercept data in transit in order to alter or completely delete it. This creates a significant void in inefficient communication channels such as email.

Take A First Step With Blockchain Development Company, We’re Here To Assist You!

8. Reduce the threat to human safety posed by cyber-attacks:

Recent technological advancements have resulted in the deployment of unmanned military equipment and public transportation. These automated vehicles and weapons are made possible by the Internet, which speeds up data transfer from sensors to remote-control databases.

However, hackers have been breaking and gaining access to networks such as the Car Area Network (CAN). When breached, these networks provide hackers with complete control over critical automotive functions. These occurrences would have a direct effect on human safety. However, by conducting data verification on blockchain for all data that enters and exits such systems, numerous adversities could be avoided.

Irrespective of how it is used, the critical feature of blockchain technology is its decentralization. This feature eliminates the possibility of a single target point being compromised. As a result, infiltrating systems or sites where access control, data storage, and network traffic are no longer centralized becomes nearly impossible.

As a result, enterprise blockchain solutions may prove to be one of the most effective strategies for mitigating cyber threats in the coming years. Nonetheless, blockchain, like any other new technology, faces numerous startup challenges as it goes through the agonizing process of growth.