Blockchain for Cybersecurity: Unlocking the Pros and Cons in the Current Market Industry 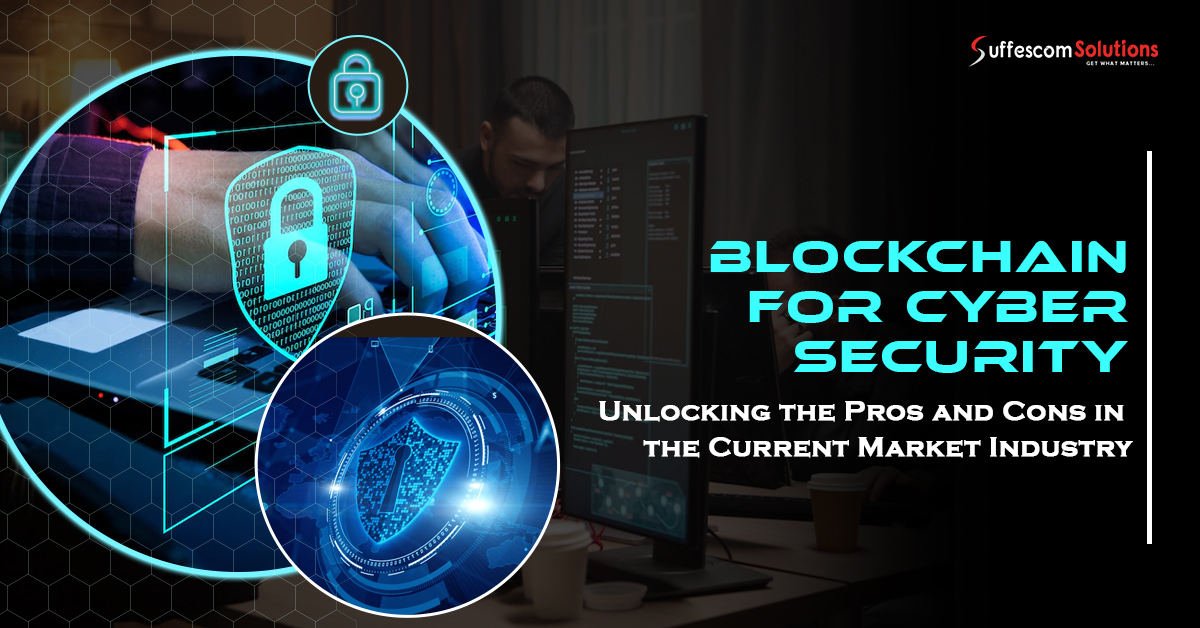 A world free from unethical fraud is the dream of the people. Today and in the recent past, the digital world has been susceptible to online threats. Hacking has existed since the time of the evolution of computers.

But with the constant advancement in technology, it seems like there will be a depreciation in online deceit. To a great surprise, it didn't happen. On the contrary, it has increased and taken an adverse state. It has become a cause of concern recently as the level of intrusion has reached to next level.

The world is facing dangerous hacking attacks, which will only get dreadful. Experiencing phishing attacks on both medium and high levels is very common nowadays. Although hackers have mastered their skills, various techniques have been formulated to tackle such issues. One such most prominent example is using an enterprise blockchain solutions to boost cyber security.

Now the question arises, does blockchain adds up to the security perspective? The answer is "YES." Blockchain technology has everything right from protecting data, providing network security, and building robust communication. Moreover, the implementation of the blockchain for cybersecurity comes with its pros and cons. All this will be discussed in this article; just stay tuned!

Also Read: Future Use Cases Of Blockchain For Cybersecurity

Talking about the current time, we can say that almost every business is functioning online. A cyber-attack is responsible for the toppling of any well-off business. There is a constant threat of data violation, manipulation, and stolen data. This causes significant monetary losses to the firms and creates a bad reputation in the market. Everything in combination works in opposition to the businesses.

Initially, blockchain started as the technology behind Bitcoin, but its popularity has expanded its branches in cybersecurity. So far, everything is working in its favour, and people have high hopes regarding this technology.

Cyber attack is the worst ordeal for any established field. Be it large financial institutions or tech companies, all of them are at higher risk. Apart from this, worldwide personalities have also been on the radar of such ransomware attacks.

So, overall it can be stated that cybersecurity is applicable in all the domains, and to support there are specific stats that are mentioned below;

How does Blockchain Secure Data?

Identifying Errors: Blockchain can recognize the errors with every change in data. One can find the specific point where the mistake is performed in the network.

Monitoring Every Change: Whatever changes are applied to the data remains in the database, and no one can alter that. Therefore all the modifications in the data are tracked and monitored.

Stopping Identity Theft: The users are provided with specific private keys. This has an advanced encryption technology that makes sure that no one can steal the data. Every single bit of information is validated, which keeps the hackers out.

Storing data at various locations: Several blockchain network systems constantly download and transfer the data. The copy of the data is stored locally. Therefore, numerous sources have the backups of the original information even if data is compromised.

Advantages of Blockchain in Cyber Security

The blockchain helps maintain swift and safe transactions related to any domain, be it data related or financial. One of the most prominent attributes of the blockchain in smart contracts. The motive of smart contracts is to permit the automatic implementation of the codes among various parties. It is a transparent technology that transfers and stores data more guardedly.

The blockchain systems work decentralized compared to the traditional ones. Traditional systems are more centralized, and the complete network stops functioning if the node stops working. In the blockchain, a single failure point does not affect the whole working of the system. There is absolutely no compromise on the safety of the transactions on the blockchain.

The user's privacy in the blockchain network is higher. The reason is the presence of public key cryptography. This key handed over to the network members is authenticated. Blockchain acts as a dominant entity that acts as an authority. This is done via tools that allow them to possess and manage data.

Disadvantages of Blockchain in Cyber Security

Flexibility: Blockchain is a trending topic nowadays, especially considering its applications just out of the world. But still, some companies are not in a position to adjust themselves in this scenario. The simple reason behind this is the availability of blockchain developers. The ratio of software developers in the blockchain field is extremely low compared to the other domain. Also, the integration process seems challenging for these businesses due to their unawareness. Thus, if any new technology is implemented, the older/existing ones need to be removed. This is time-consuming, and greater efforts are required to execute such operations.

Dependency on Private Keys: Blockchain technology heavily depends on private keys. The private key is a password that is used in cryptography. Such keys are used to create digital signatures and cryptography transactions. The purpose of private keys is to develop an interaction with the blockchain, but the user passwords are not reinstated. If the private key is lost, it becomes very difficult to decipher the data.

Higher Costs: As we know, blockchain has mind-blowing features. To support such a dense platform, the storage capacity needs to be of optimum level. The next thing corresponding to storage is the computing power. Again, the computational performance needs to be magnificent. Lack of such things results in poor performance and will threaten the system. So, considering all such stuff, the marginal costs shoot up, and the maintenance costs escalate.

Insufficient Governance: Blockchain technology is solely based on a ledger database distributed among various network nodes. All the information is saved in the database in electronic format, which requires a higher level of security.No data should be misplaced. That means proper management and supervision are required at all levels. The blockchain has not provided such a facility in total capacity until now.

Blockchain and Cyber Security Use Cases

The evolution of blockchain is expected to add a larger-than-life value to cybersecurity. The transactions taking place in the entire network are fully reliable. The integrity of the system is remarkably assured. It has excellent potential if this technology is used in various aspects of cybersecurity.

For more information, let's have a look at the use cases;

Many communication channels are loosening up to blockchain technology to add hi-tech security by providing end-to-end encryption. A standard security protocol is created by blockchain with the help of a unified API framework. In the past, the most famous social media platforms like Facebook, Instagram, and Twitter have been constantly attacked by users. For platforms like these, security is of utmost importance to curb such attacks in the near future.

IoT Security: The advancement in artificial intelligence has made it relatively convenient for hackers to intrude into the system. They utilize ultra-modern gadgets to obtain access to the network. Such edge devices are multiplexers, routers, switches, firewalls, etc. The only downfall is that only limited attributes are present in those devices.

To overcome this limitation, blockchain is applied to the entire system. The whole setup is decentralized, and the plus point is that they take almost all the decisions alone. The independent decision-making capability rates it higher than its contemporaries.

If any dubious things float on the surface level, the leading authority allows the devices to detect and identify them. If, for instance, such attacks happen, then this blockchain for cybersecurity behaves as a protective shield that is harder to budge.

Decentralized Storage Medium: Today, data theft has become a worrisome cause for various business organizations. Several firms are using centralized systems for storage purposes. It becomes significantly more accessible for hackers to attack such systems. Several weak or unprotected points are on the verge of a breakdown. Hacking is performed at these exposed points, and all the confidential data is leaked.

Now, with blockchain, there is a decentralized procedure for data storage. This makes it impossible for hackers to infiltrate the systems. Most blockchain cybersecurity companies are finding innovative ways to protect their data from hackers.

The system's integrity can be ruined by the system glitch due to either data tampering or any collapsed component malfunctioning. The potential of this fantastic technology in collaboration with cybersecurity authenticates the cyber-physical infrastructure.

Whenever data transmission occurs, there are high chances of unwarranted access. In this case, only blockchain can be used as a saviour to curb such situations. The availability of an advanced encryption attribute stops the destructive elements from penetrating inside the system.

This method would enhance the trust and coherence of data transmitted via blockchain. It simply maintains the integrity of the transmitted data. The role of fraudsters online is to either breach the data entirely or make modifications to the existing data. To overcome such problems, the blend of blockchain in cybersecurity will prove to be excellent.

The Inception of System Software:

The blockchain's main objective is to ensure that whenever any software is downloaded, there are higher chances of any remote intrusion. Blockchain confirms activities like patches, firmware updates, installers, etc. Various malware is always ready to attack the system. They just wait for the vulnerable time where they can simply make a successful intrusion.

Let's take an example of the MD5 hashes where the latest software identity is distinguished from the hashes available on the dealer's website. Now, there is one more thing all the hashes cannot be fully secured because it may happen that the platform may already be compromised.

The technological advancement has been impressive, and its application in the defense sector is fantastic. All the military vehicles in the commissary have Hitech features that directly connect with the remote/push control databases through various sensors and detectors. On the other side, hackers have also become multi-talented, utilizing staggering techniques to break into the system by any means.

They attain access to the network by using malefic methods. The network loses control and hands the hackers essential or sometimes absolute authority. This can create a massive system dysfunction, which can lead to heavy destruction.

The lives of humans are in danger if such things occur. So, blockchain technology provides complete data security and has protective layers. This makes it nearly impossible for hackers to penetrate the system. It can hugely impact the network, due to which casualties can be avoided.

Blockchain has many market opportunities and multiple ways to implement them in various domains. They offer superb characteristics, as discussed above, and along with that nft, cybersecurity has become an exciting trend. Every listed project needs to be secured; otherwise, they will become another victim of these dangerous hacking attacks. Shifting from conventional to blockchain solutions adds enormous benefits in every industry.

For more information, get in touch with us!

Go through our Recent Blogs and get answers to every tricky question. How Do You Build a Digital Twin?

In business, there is cut-throat competition. This is why businesses always have to be on edge about new developments in [...]