How to Build Blockchain Games from Scratch to Power Your Business? 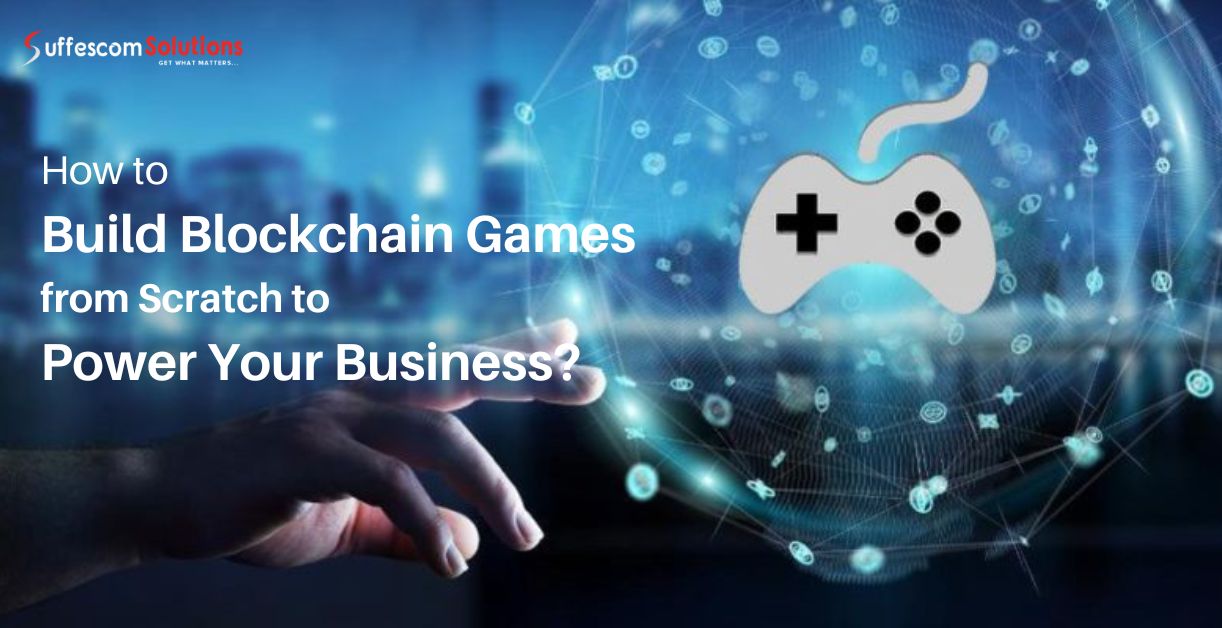 Gaming is one domain that has been a favorite among people since its inception. Gaming enthusiasts' admiration for online gaming has tremendously increased in the last decade. Initially, the games were just single-player, but with timely advancements, the multi-player games garnered much attention.

A lot has changed due to the revolution in gaming. Starting from PC,  video games, play stations to now blockchain games. The previous ones were just subjected to enjoyment and real-time communication. On the contrary, the decentralized gaming apps opened not only facilitates real interaction but also help in generating rewards.

Let’s take a peek into blockchain gaming and see what goes behind the game development process!

What is Blockchain Gaming?

The basis of blockchain gaming is the decentralized model that offers utmost security while performing any operation. There is no chance of any fraudulent activity changing the records in the entire network.

Blockchain games encompass various business models depending on the latest technological developments. Their names are enlisted as under;

The one that has gotten more attention is the play-to-earn model because of its popularity.

The latest business model in gaming is play-to-earn. This rewards player for participating in or playing in-game activities. It also allows them to earn real-world money such as fiat, tokens, or cryptocurrency.

There are many p2e gaming options in traditional gaming, but popular Play to Earn Nft game platform such as Axie Infinity and Decentraland are exploding in the web3 space. But Axie Infinity has captured the much larger attention of the audience.

Axie Infinity is an example of a popular game where players can collect creatures called "Axies". These Axies are bred with other Axies and can be battled with other Axies. The native token of p2e crypto allows players to feed their NFTs and develop their powers. They can also trade their powers in exchanges.

Many play-to-earn crypto games provide native tokens and cryptocurrencies for in-game purchases in the form of NFTs. These NFTs are traded in the game's marketplace or another NFT exchange.

Bit By Bit Analysis Of Building A Blockchain Game

Blockchain gaming development is a complex process and requires a deep market analysis. One must consider all the characteristics, advantages, and risks involved in blockchain game development. There are a lot of decisions that need to be taken to build a very enticing blockchain game platform.

Find the Reason To Choose The Blockchain Development

Blockchain games are highly in demand. So, many investors are looking forward to building a gaming platform like this. But the larger question is why one wants to explore this niche. Thus, a self-evaluation is required before executing the strategy for blockchain development Company. Blindly following the trends in the market is not a good idea to go ahead and build a blockchain app.

Market Research is the foundation of developing a new thing. It gives an in-depth knowledge of how the industry works and the already existing games in the blockchain world. The popularity of the crypto games needs to be examined, and the ones not getting that much attention also need to be analyzed. On weighing all the aspects, a decision is taken on what attributes need to be added that will make it an exception in the gaming zone.

The game engine is the essential thing that decides the functioning of blockchain games. The game engine needs to be properly checked. It's important to select the appropriate gaming engine. For that, being in touch with experienced blockchain developers is important. Building a random app is not enough to generate revenue; therefore, it's desirable to instill all the properties that will help get positive user responses.

Another essential thing that needs focus is the SDKs (software development kits). These are the combination of precise tools in the form of programming languages and frameworks. To create a blockchain game app from scratch, the software needs to be smoothly integrated into the app, encouraging a sustainable blockchain ecosystem. The resources and the time is drastically saved.

Taking Help From The Experts

The significant move towards building a blockchain game from scratch is to take ample help from the developers. They are the experts that will guide you through the whole process. The experienced team consists of UX/UI designers, quality analysts, testers, software architects, etc. The technical assistance from all these professionals helps build an error-free platform. To avoid confusion, it's better to have a word with a reputable blockchain consulting company. Want To Redefine Your Business Idea?
Give Us A Chance!

Exchange Your Ideas With Our Experienced Blockchain Development Experts.

The development phase is incomplete without the testing procedure. There is the possibility of various bugs and errors that could hamper the app's functioning. Hence, it's of utmost importance to maintain the quality of the built app or platform. This is done by running the test file and executing certain commands beneficial for validating the game functions.

Asset ownership is an important thing that adds a special value to blockchain games compared to conventional ones. This can be well understood; if a person requires to purchase gaming assets for fiat money, then they will get a code to utilize that particular item around the range framed by the developers.

This is one of the amazing features that enable the players to get ownership of any data. This is an absolute privilege that is presented to the users. A large set of items includes weapons, virtual lands, or uniquely created characters. The main point is that one can do whatever one wants with the in-game assets. The players can even trade (buy or sell ) those assets or can rent them.

The heart of blockchain games is the NFTs. Without them, the operations and the gauging of the application's performance seem a bit complex. Basically, nfts are virtual assets primarily based on the ethereum blockchain. Various standards need to be implemented. The ethereum smart contracts like ERC-1155 and ERC-721 help execute the smart contracts.

There are two most unique characteristics of the nft tokens, i.e., immutability and uniqueness. Whatever transaction takes place, it cannot be exchanged or altered. Thus, whatever data is present on the network is not susceptible to change.

Blockchain games are built to incite the cross-games. As with the traditional games, there was either a single mode or traverse the gaming ecosystem with additional players. Certainly, with blockchain games, the players can develop and interact with others, thereby sharing digital assets.

It essentially means that there is an interconnection between the games. For instance, if the player has performed an act in one game, its outcome, i.e., reward or punishment can be achieved in the other game. There is a cross-effect on the blockchain games that adds a unique element to the blockchain game.

Open world economies allow developers to collaborate with other developers and create unique experiences for players. This can increase retention and engagement. Developers have the opportunity to earn a commission for secondary sales of in-game assets, creating a new revenue stream.

Blockchain platforms have powerful data encryption technologies, like a private-public key to secure crypto token transactions. Such techniques are almost impossible to hack with the technology currently in use, making them secure. One can build their game on blockchain as an entrepreneur or game developer in a safe environment. Hackers are not capable of destroying a decentralized blockchain network, as there isn't one server to defeat.

Online gaming is quite expensive. Players using real money make the transactions not so economically efficient. Blockchain allows instant payments without any restriction in case of payment processing. There is no usage of credit/debit cards. The payment is made decentralized, making it impossible to steal any data.

Online fraud and hacking are synonymous to each other. Some technical loopholes enable fraudsters to do fraudulent activities. Blockchain is such technology that has the ability to eliminate all fraud chances and save billions. The smart contracts are coded whenever a blockchain-based game is built. The smarter way to prevent fraud is to utilize an open ledger for all transactions.

Reducing the price of gaming assets

The developers can limit the higher prices of gaming products. Gaming enthusiasts look for stolen items on the digital marketplace because of their high prices. Blockchain provides the advantage of micro-transactions which are extremely affordable. Developers can sell power-ups at a low price without losing profit. Users can also control how much money they spend online.

Blockchain gaming offers a unique advantage over other games, where you don't own your in-game purchases. Instead, players are responsible for their assets. Blockchain-based games use smart contracts to manage transactions. Smart contracts are executed after the conditions are met. All in-game assets purchased by smart contract players are automatically transferred to their public addresses. Smart contracts allow for complete transparency, allowing players to see the rules.

Blockchain games are all set to create an uproar in the virtual world. Blockchain technology may seem complicated, but the implementation is quite easier with the streamlined process. The Game developers adopt numerous approaches to create a unique gaming experience with NFTs.

Gaming studios can launch projects and issue NFTs or tokens. This will allow them to generate initial investments from players interested in playing their games instead of equity investors or VC firms. A fascinating gaming ecosystem is created to support a virtual economy.