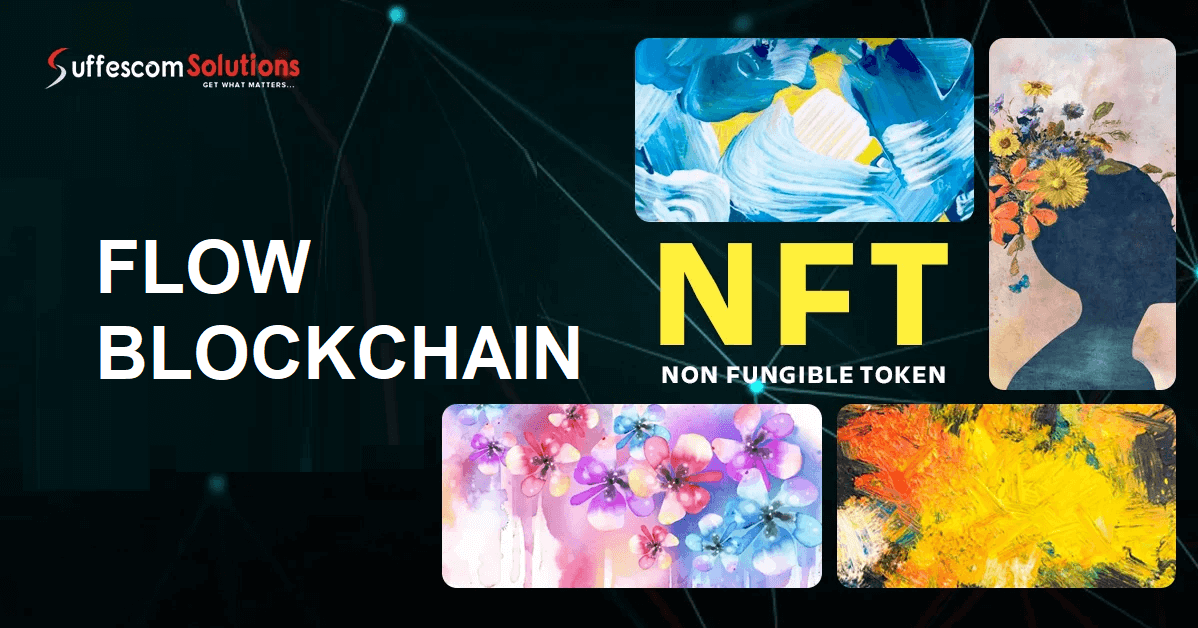 Blockchain technology has been in the public eye for quite some time now. It is gaining immense traction, and the growth is unmatched as it offers innovative financial services. There is a tremendous rise in the invaluable opportunities created by successive transformations. Everything revolves around the crypto hub in this technology, including smart contracts, wallets, tokens, etc.

Virtual finance and the services related to it enjoys an impressive place in the technological world. This is because gigantic services are carried out via blockchain networks.

NFTs on the other hand has been in the spotlight due to their phenomenal demand in the digital environment. Initially, people were skeptical about its performance but now it has rattled its competitors. Major big shots are now finding ways to plunge into this sphere. There are a variety of blockchains that have become popular in today’s time. They include names like Ethereum, Solana, Binance Smart Chain, etc.

To cope with the present conditions, these exquisite platforms are remodeling their architecture. With already existing pressure, the arrival of the flow blockchain has been incredible. Their emergence is genuinely spectacular as it has smoothly carved its way out in the best possible way. Owing to adopting a unique approach it has shown impressive dominance among the key players.

This article will brief you about everything related to the flow blockchain NFT marketplace. Stay tuned!

What is Flow Blockchain?

Flow is a decentralized blockchain network that is created for future generation gaming assets and applications. This is the application of a unique architecture that involves the intrinsic assistance of scaling. This characteristic subsidizes the escalated transaction load and manages huge transactional data.

This blockchain development company enhances the overall output, efficiency, and speed of the platform by maintaining a developer-friendly environment. Highly successful and commercial crypto-based businesses are created by this perfect medium.

The high transaction speed is the distinguishing feature of the flow blockchain. It was built as the first ever NFT platform that was unable to deliver the required speed and faced multiple obstructions. Thus, Dapper Labs came up with this smash-hit blockchain.

This blockchain utilizes a proof-of-stake protocol that fosters cost-effective transactions. It is designed in a way to boost portability and swiftness. Such attributes are apt for the  NFT collectibles and crypto-based games. Now, everything that we talk about the speed and output completely depends upon the architecture of the blockchain. In the blockchain network, there are several nodes that store all the transactions. There is the complete splitting of the work into four categories:

Consensus nodes: Determines the existence and order of the transactions in the network by using a POS algorithm called HotStuff.

Verification nodes: Controls the execution nodes and works together with the consensus nodes to establish security in the network.

Execution nodes: Allows calculations of all transactions corresponding to each transaction.

There is the proper involvement of these above four nodes in the transaction. The implementation of these junctions is responsible for high-security maintenance.

The Architecture of the Flow Blockchain

There were a lot of concerns that existed within the blockchain network. The surfacing of the flow blockchain has distinguished it from the others. Let's check out its verticals as under;

Developer Friendly: The developers require a congenial environment to help the developers in building the applications more effectively. This blockchain has its own programming language known as Cadence. It is created around the blend of resources that represents the ownership of the asset with the crypto-initiated properties. This programming language is easy to understand as it possesses an ergonomic syntax. There are a number of open source tools that benefit the developers to get a convenient push to get started. These tools encompass Flow JavaScript SDK, Flow Go SDK, fungible and non-fungible token standards, and visual Studio Code Extension.

It is designed for general acquisition by the users by emphasizing a lot on the developer-friendliness. This makes it convenient for non-crypto people to participate in the network. Users can quickly recover their lost keys in the Flow network. The redundant steps are avoided to proceed further with their preferred projects. Samsung, UFC, NBA, UFC,Ubisoft etc.

Sharding: The user accounts and smart contracts are likely to interact in an atomic, consistent, isolated, and durable transaction commonly termed “ACID”. Every application on the Flow blockchain runs in the distributed execution state. The layer 2 solutions and sharding burst the composability and lower the network effects for decentralized applications. Though sharding is beneficial in some situations, it is not a long-lived solution.

Decentralization: The process of joining the Flow ecosystem is simpler for the users as well as the developers. Mostly the people can take part in the network's consensus process, which keeps the network secure.

Backing by Investors: Flow blockchain is supported by some spectacular investors that maintain the viability and the long-term growth of the environment. Warner music group, coinbase ventures, and Andreessen Horowitz are some examples of distinguished investors.

High Output: The flow blockchain was built on the premise of enhanced throughput value. The NFT-driven dApps and other crypto games give rise to inflated user activity. Numerous transactions are supported by this blockchain network without any complications.

Low Complication: It is well known that flow blockchain uses scaling solutions instead of sharding. Sharding divides a blockchain into various fragments known as Shards and stores them in multiple locations. There is a need for synchronization among the shard chains that stirs up complexity in the network. This creates a struggle in the building of the smart contract application.

Revamping of the Smart Contracts: In the conventional decentralized applications, the smart contracts cannot be transposed, once deployed. The smart contract code is fixed and cannot be altered after the launch. The developers also don’t have the access to manipulate the changes in the code.

Flow blockchain has sorted out this mess by allowing the upgradation of smart contracts. Here, these contracts are moved out to the beta network where the codes can be tweaked. An alert is generated every time notifying the users that the code is half-done. When the developers feel like their contract is as per the requirement, then these contracts can be released.

Easy to use: There are several attributes that are introduced in the flow blockchain that are convenient to employ. Some of these characteristics are smart user accounts and intelligible security messages. Hence, it is straightforward and can be comprehended effortlessly by the users.

Limited Cost:  On the traditional blockchain like ethereum, the gas fees were extremely higher. But now in flow blockchain, the cost is reduced drastically. The implemented smart contracts on the standard blockchain cannot be manipulated. Now, if any alteration is required then the entire network needs to be changed. This eventually requires massive pricing and a lot of money is spent in the whole process. Whereas in the flow blockchain, the smart contracts are deployed on Beta, which means easy replacement and lower cost.

Cryptokitties: developed by dapper labs, it's an Ethereum-based blockchain game that allows the users to trade and breed virtual cats. These cats have diverse features with different levels of uniqueness.

NBA Top Shot: This is a platform that allows sports fans to buy and sell licensed video clips of their favorite players. It was developed by the Dapper Labs in association with the national basketball association to build an NBA top shot.

Top Expo: This is a real estate-based marketplace where there is the buying and selling of dark lands.

VIV3: this is the first mainstream marketplace that is built on flow blockchain. the drastic future shift from physical to digital freeholding led to the evolution of the VIV3 it is licensed to accredit people to firstly construct and then perform the necessary trading and marketing of their personalized prized possessions.

It has the ability to deliver an extremely scalable and capable smart contract platform to deliver high performance without any compromise made on decentralization. Brands, Artists, and Game Studios utilize VIV3 to mint distinctive tokens constituting Flow Blockchain. Such NFTs are acquired by gamers, fans, and digital asset dealers.

Composability: Every art created by the artist is minted from their very own blockchain smart contract. There is easy integration with contracts from the individual artists in the Flow blockchain network rather than the complete marketplace pool. This enables the new use-cases that are built on top of each asset,

VIV3 encompasses all the Smart contract deployment, transaction fees, and blockchain minting. This helps the artists in doing the best they can to create art. It has been seen that the creators can earn upto 87.5%  directly from the sales. Moreover, an extra 10% can be earned from the reselling of the same collectibles whenever there is peer-to-peer trading in the respective marketplace. Creating an NFT minting website

shoots up sports, real estate, and other digital assets with AI-enabled blockchain technology.

There are always special announcements related to the upcoming partnership with top-class artists. It could also be considered as the special drops that get launched as the collectible card game. These digital collectibles are traded as well as minted on VIV3 and henceforth can be purchased in huge numbers.

These game items are built by the B-Side Games platform. This stimulating cross-platform possess a massively multiplayer online game. Here, one can have a fight, trade, and engagement with the virtual giants in the open world.

For example; On VIV3, Game Alpha Access and Chainmons are accessible for trading.

The potential and the flexibility provided by the flow NFT marketplace are tremendous. Their multi-node architecture and robustness have great relevance. Being open and decentralized, it focuses on providing a single platform for considering emerging use cases. It has the supreme power of adding an extra value by initiating the development of open economies under users' possession.